Are you between 12 and 14 years old? Want to be a part of the biggest international YAA Film Jury?
Please apply here -> youngaudienceaward@filmuniversitaet.de

This year, for the first time, there will be the Young Audience Award German-speaking Online Film Jury in which young people from all over Europe can participate. Whether from Germany, Austria, Switzerland, Luxembourg or other countries - participation is open to all German-speaking youths. The international jury sessions and film viewings take place online instead of in the cinema.

Over the course of two days, the participants from the different countries first get to know each other and gain an insight into film analysis and film critics. In the following days, the films are watched via a streaming platform from home. At the second digital meeting, the jury members discuss and analyse the nominated films, expressing their opinions as well as exchanging their own perspectives upon the films and topics. Afterwards, they can vote for their favourite film and participate in the digital programme of the European Film Academy - including Q&As with the filmmakers. The winning film will be announced at the Award Ceremony.

The new project is being carried out with and funded by the Federal Agency for Civic Education in Germany (Bundeszentrale für politische Bildung, bpb). It is organised and hosted by the Filmuniversität Babelsberg KONRAD WOLF, with the project “Kinderfilmuni”. The project is carried out in cooperation with the Academy of Austrian Film, the Swiss Youth Film Festival and ZoomZ - Platform for Children's and Youth Film Switzerland, LUX - Luxembourg City Film Festival, the Golden Sparrow - German Children's Film and Media Festival (Cinema, TV, Online), the Saxon Service for Children’s and Youth Films with the Schlingel International Film Festival for Children and Young Audience. It is supported by VISION Kino and the Film museum Potsdam.

Surrounded by lakes it invites with its wonderful parcs and castles. The economy of the federal capital is dominated by creative media technology and scientific institutions. Since 2020 Potsdam belongs to the UNESCO creative cities of film.

The Film University is Germany's first film university, bringing scientific and artistic research together. We explore film as a narrative and technological medium, as an artistic and social practice, and as a phenomenon shaping education, entertainment, and our cultural heritage. Our top priority is to deliver high-quality teaching and to support creative people in developing their own approach.

Being aware of the history of Babelsberg as a media city, we advocate free and open societies. We unequivocally oppose discrimination and political extremism. We stand up or equality and support people in different family and living situations. The Film University is a place representing and promoting the freedom of research, teaching, and artistic creation. Film is what unites us.

Vision Kino is a Berlin-based non-profit society for the promotion of film and media literacy among children and young people, active throughout Germany. Founded in 2005, it is supported by the Federal Government Commissioner for Culture and the Media, the German Federal Film Board, the Stiftung Deutsche Kinemathek as well as the "Kino macht Schule" GbR, consisting of the Verband der Filmverleiher e.V., the HDF Kino e.V., the Arbeitsgemeinschaft Kino - Gilde deutscher Filmkunsttheater e.V. and the Bundesverband kommunale Filmarbeit e.V. Federal President Frank-Walter Steinmeier has assumed patronage of VISION KINO.

The aim and task of VISION KINO, as part of cultural youth education and within the framework of an overarching film education, is to strengthen the film competence of children and young people in particular and at the same time to sensitise them to the cultural location and original place of reception of film, the cinema.

Germany has been part of the Young Audience Award since it began in 2012 and the YAA Ceremony has always taken place in Erfurt. The other participating cities are Berlin, Potsdam.

Chemnitz is a large, modern city in the heart of Europe. It lies close to the borders of two neighbouring EU member states – the Czech Republic and Poland.

It is a place where traditional inventive spirit and ingenuity meets the high tech developments of the 21st century. The former “Manchester of Saxony” has been at the heart of the mechanical engineering industry for more than 150 years. Chemnitz University of Technology and the many research institutes based here are testament to the city’s status as leading national research and development centre. Sights such as the Marx Monument, the art collections with the Gunzenhauser Museum or the Petrified Forest in the Tietz Building are among the most popular attractions for tourists. And those who want to see attractive landscapes can choose short trips into the nearby Ore Mountains, to castles and romantic river valleys.

The International Film Festival for Children and Young Audience SCHLINGEL is Germany’s largest platform for international children’s and youth films. Every year in autumn the festival shows an overview of current international productions and wants to motivate distributors, editors, broadcasting companies and cinema operators in Germany to promote and support the films after the festival. More than 150 recent productions from around the world are waiting to be discovered and marvelled. Beside this different workshops offer the opportunity for children and young people to become active themselves and to practice their skills in film reception, analysis or production. Professionals can discuss current trends after various interesting presentations and panels. The festival is organised by Saechsischer Kinder- und Jugendfilmdienst e.V. (Saxon Service for Children’s and Youth Films).

Germany has been part of the Young Audience Award since it began in 2012 and the YAA Ceremony has always taken place in Erfurt. The other participating cities are Chemnitz and Berlin, Potsdam.

Erfurt is the charming capital of Thuringia in the heart of Germany with one of the best preserved medieval city centres in Germany.

The famous theologian and reformer Martin Luther lived here and studied at university. One of the many tourist attractions is the Krämerbrücke (Merchants' bridge), which is one of the few remaining bridges in the world that have inhabited buildings. Further highlights are the ensemble of Erfurt Cathedral and St Severus's Church and the Petersberg Citadel, one of the largest and best preserved town fortresses in Europe. It is also a place of a number of historical Jewish sites like the Old und Small Synagogue. Since 2003 Erfurt is one of the host cities, next to Gera, of the German Children’s Media Festival Golden Sparrow. 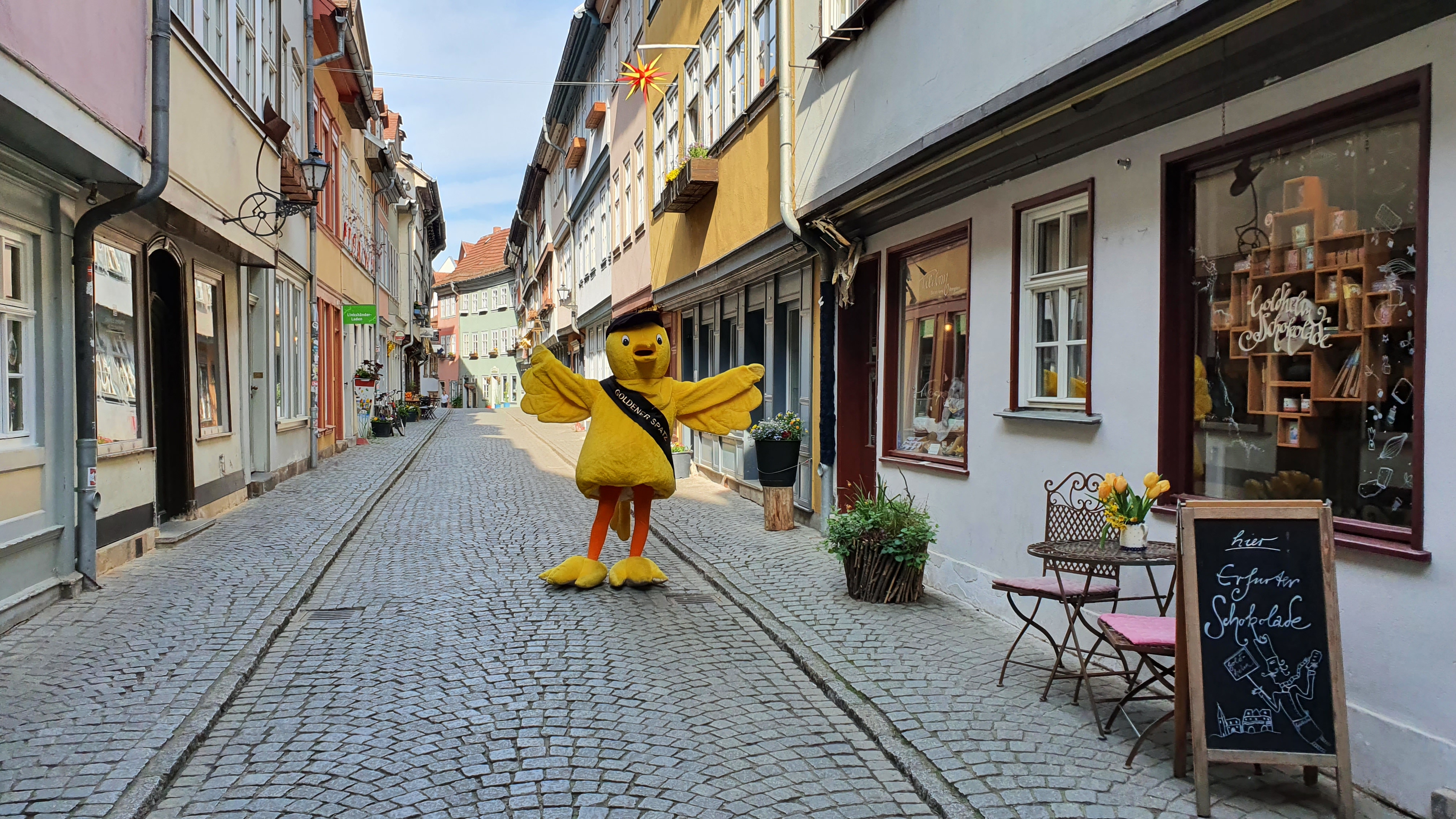 The German Children’s Media foundation Golden Sparrow is committed to stimulate and support high quality media productions for children for cinema, television and digital media in Germany. Among other projects it organizes the biggest festival for German-language children’s films and media in Gera and Erfurt. Through the festival the young audience receives access to high quality media productions and becomes actively and creatively involved through watching films in the cinema, participating in workshops and creating their own projects. The Foundation is also active on a European level through the initiative KIDS Regio which aims to improve the production, promotion and distribution of children’s films in Europe.

The foundation is a non-profit organization and collaborative venture between public and private broadcasters such as MDR, ZDF, RTL, the TLM (the state media authority of Thuringia), MDM (Central German Media Funding) and the cities of Gera and Erfurt.