Bosnia and Herzegovina has joined the Young Audience Award in 2017 with its capital city Sarajevo. In 2022 film jury members will participate for the 6th time watching and discussing nominated films online and in the cinema in Sarajevo.

Sarajevo is the capital city of Bosnia and Herzegovina and its political, economic, trade, university, scientific, cultural and sports centre. Sarajevo is a city of long history, city of unique charm and traditional hospitality, a city where the East and the West meet, a city which had always been a place of encounter of different cultures and civilizations.

Sarajevo became known throughout the world due to the assassination in 1914, which triggered the outbreak of the First World War- the first war of global, world impact. Unfortunately, the 1990s brought our city to the focus of world’s attention on account of the longest siege in recorded history. 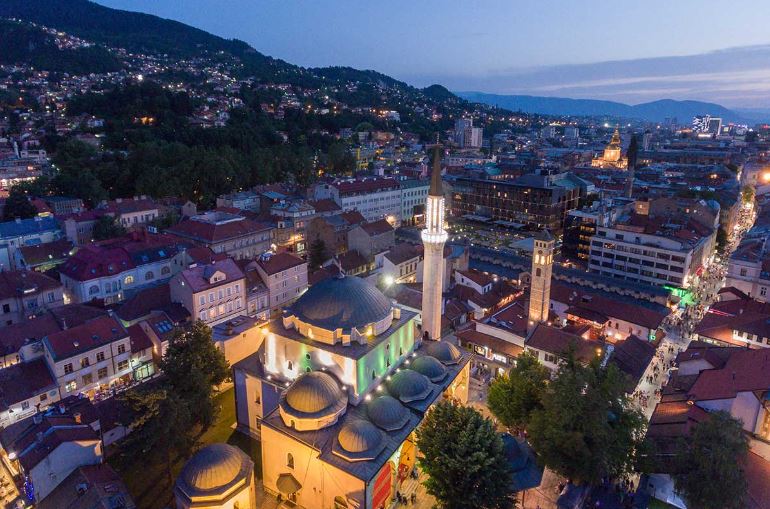 Sarajevo is one of the rare cities where, within ten-minute walking distance, one can find the houses of worship of the major world monotheistic religions – the Orthodox and Catholic churches, synagogue and mosque. All those traditions enriched and made the cultural synthesis of Sarajevo unique. If we add to that the heritage of socialism, the strong cultural resistance which emerged during the siege, and the vibrant cultural scene of contemporary Sarajevo, we are left with a fascinating spiritual fabric.

The City of Sarajevo, with its Olympic beauties: Bjelašnica, Jahorina, Igman and Trebevic, was the host of the XIV Winter Olympic Games, which were the best organized Olympic Games up to that time. The richness of its cultural-historic legacy, and natural beauty, testify that Sarajevo is an increasingly more attractive tourist destination. Sarajevo is a city of festivals, with Sarajevo Film Festival, as the largest regional film festival, occupying a central place among them.

Towards the end of the four-year siege of Sarajevo, in 1995, Obala Art Centar initiated the Sarajevo Film Festival with the aim of helping to reconstruct civil society and retain the cosmopolitan spirit of the city.

High quality programming, a strong industry segment, an educational and networking platform for young filmmakers and thus generated presence of the international film industry, film authors and media representatives alongside a paying audience of over 100,000, confirm its status as the leading film festival in the region, recognised by both professionals and the wider audiences.

In an emerging territory of more than 140 million inhabitants, Sarajevo Film Festival serves as a common platform for film businesses from all over the region, setting the future standards in festival organisation, film promotion and presentation in South-East Europe.